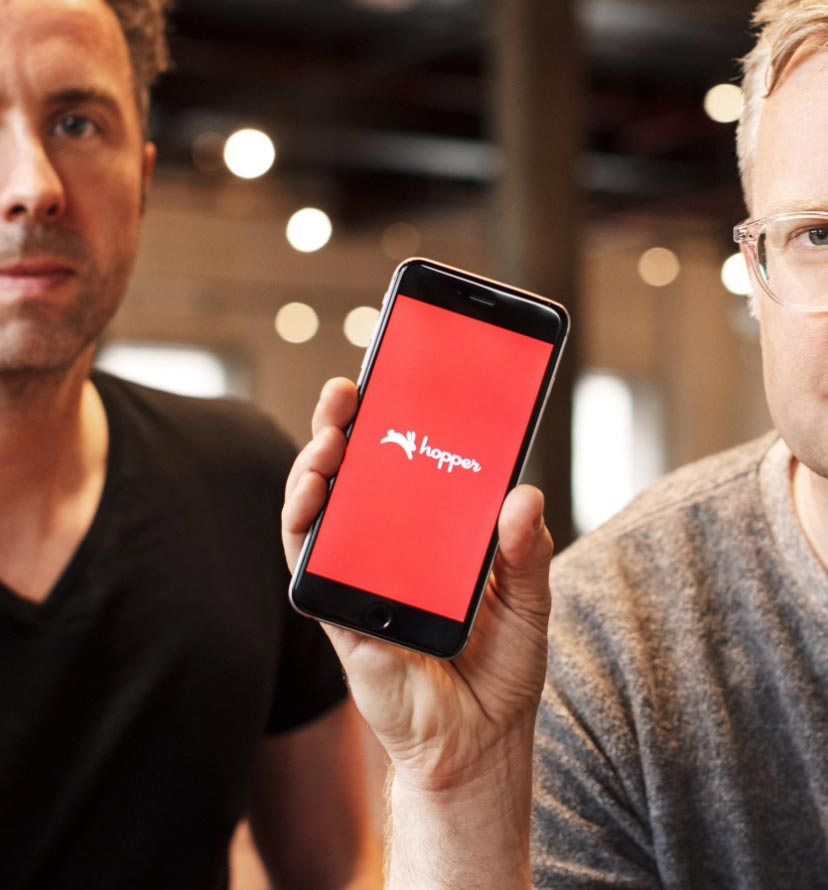 Hopper is a travel app that leverages big data and machine learning to predict and analyze airfare and accommodation prices. Co-founded in 2007 by Frederic Lalonde and Joost Ouwerkerk, Hopper creates data-driven financial technology products to enable its customers to save money and travel better.

Recognized as one of the world’s most innovative companies by Fast Company three years in a row, Hopper has been downloaded over 60 million times and sees over 1 million new installs per month. In addition, the app has received high praise in the form of mobile accolades such as the Webby Award for Best Travel App of 2019.

With over $590M in funding from leading investors in Canada and the U.S., unicorn startup Hopper is primed to continue its acceleration to becoming the world’s fastest-growing end-to-end customer-centric travel offering.

Based on its current run rate, Hopper is pacing towards 330% revenue growth compared to last year and it has already surpassed its pre-pandemic revenue peak from Q1 2020 by over 100%.  The company’s fintech offerings such as Cancel For Any Reason and Price Freeze represent 50% of its revenue.

Given the success of its fintech offerings, Hopper also recently announced its new B2B initiative called Hopper Cloud. Through this partnership program, any travel provider – airlines, online travel agencies, meta-search companies, travel agencies, etc. – can integrate and seamlessly distribute Hopper’s fintech or agency content. As its first partner, Hopper announced it was partnering with Capital One to power its new travel booking portal.

In order to support this accelerated growth, Hopper needed to bring in experienced people capable of ramping up and building the base of its SRE team.

"We need to build from a strong base. At the end of the day, it’s all about the quality of the candidates. We wanted senior engineers that could bring with them a lot of experience and are very competent in what they do,” shared Sebastien Rainville, co-founder and engineering lead at Hopper.

Working on ways to improve the quality of the funnel, Hopper turned to different recruiting agencies for help. But the vast majority of them were not producing much value.

By fall 2020, Hopper was struggling to find a good senior SRE.

“I noticed that Hopper had multiple roles advertised for a long time, so it was obvious that they weren’t filling them successfully. When I spoke with Hopper, they confirmed that several other agencies were working on the roles but they had no success with them,” commented Qasim Shah, principal associate at Harrison Clarke.

When Hopper received the first selection of profiles from Harrison Clarke, they were immediately struck by the high caliber of the candidates.

“It was already very different with the initial candidates that Harrison Clarke sent our way. It was like going from a random sample of candidates to highly-curated FAANG-level candidates, and I thought, ‘That’s interesting. Let’s talk to these candidates,’ and it has helped tremendously,” recounts Sebastien Rainville.

Furthermore, Hopper was pleased with the level of details in Harrison Clarke’s candidate follow-up process, efforts that generally go on to the internal recruiters.

“They gave us excellent insights into what matters to the candidates, what will make them sign or not on the bottom line,” added Rainville.

The founding SRE is a particularly challenging position to fill. These engineers have a specific set of skills and mindset, allowing them to hit the ground running and build successful SRE teams to further growth. Furthermore, top SREs are generally experienced engineers in senior-level roles, with competitive salaries and career growth opportunities within their current organizations.

Since December 2020, Harrison Clarke has placed five candidates at Hopper. From the initial wave of candidates, Hopper hired two engineers that were instrumental in setting up the company’s hyper-growth phase.

“The advantage of partnering with Harrison Clarke is that we get a small flow of high-quality candidates, which means that when we speak to every single candidate sent through Harrison Clarke, we are not wasting our time. So that in itself is highly valuable,” noted Sebastien Rainville.

Aside from a more efficient time-saving screening process, Rainville said that getting to choose between all the potentially great candidates that Harrison Clarke presented raised the bar at Hopper regarding talent level for future hires.

“So far, this is the longest relationship that Hopper has ever had with a recruiting agency.”

The SREs Qasim Shah has placed at Hopper are already making significant contributions, even after a short time. Looking forward, Hopper considers adding more junior candidates over time. “Right now, the fact that we can start with a solid basis makes it a lot more scalable. In addition, as these candidates can work on more than one area, it brings a lot of versatility and flexibility to us,” pointed out Rainville.

Hopper’s co-founder and engineering lead also added that “[the new hires] are very independent people and can work by themselves with minimal support. They’ve made important contributions both technically and culturally, by influencing the organizational structure as we shape and adapt Hopper over time.”

Presently, Hopper is in the hyper-growth phase and will remain in that mode for an extended period.

“As we plan for the next couple of years, I don’t see any point of stabilization in terms of growth, and I think it’s possible given what Harrison Clarke was able to provide in terms of quality for this type of candidate,” concluded Rainville.